Earlier today Snapchat started adding Rio Live (riolive2014) to some (or all) of its users Spanchat “My Friends” recent updates causing quite a bit of confusion.

The only control supplied to users is the ability to toggle a message reading “Rio Live is a collection of Snaps from users in the city of Rio de Janeriro. It appears in your My Friends list until the end of the even. Happy Snapping!”.

So it seems that Snapchat is updating this story with snaps of users in Rio. We can only presume that these snaps are ones users have added to their stories as opposed to sent them privately to friends.

It seemed to have cause a bit of a storm with users racing to Twitter to express their opinions… While there do seem a few commenting on how cool the feature is, the majority are asking what on earth is going on and if they are the only ones that can see it. 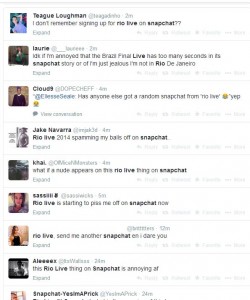 There doesn’t seem to be a way for users to remove the story which would appear to be the biggest fail on Snapchat’s behalf. Also the lack of proper explanation of this new feature or any indication of how often these stories may occur in the future isn’t helping their case.

Once the initial confusion and irritation of not being able to control the visibility of the story has subsided, it’s actually quite an interesting insight into what’s going on in Rio the day of the World Cup Final. It really does make the action feel that little bit closer (and the world a little smaller).

Why Are Snapchat Doing This

Well this is the question. Is it just a one-off for a special occasion, or is it part of a bigger test?

The cynic in me would say the latter.

With Snapchat not yet having established a way to monitise their massive network, there surely will be some commercial element added sooner or later. My guess is we could be seeing more of these ‘forced’ stories soon (some of which being paid for by advertisers). The day of the World Cup Final would have seemed the perfect opportunity to break users in gently. How gentle is gentle though, it really could have been handled a little better IMO.